You will profit from:

Located in the heart of Europe

The Federal Republic of Germany is located in the heart of Europe, bordered by nine countries. Germany is a founding member of the European Union and its most populous country. It shares a common currency, the Euro, with 18 other EU member states. It is a member of the UN, OECD, OSCE, NATO, G7, G20 and the Council of Europe. The Federal Republic of Germany is considered as one of the most politically influential states in Europe and is a partner country with international cities and countries.

A diverse geography and climate

Germany has a temperate climate with four distinct seasons. There are sixteen national parks and over one hundred nature parks. Its coastlines to the north border the North and Baltic Seas, and to the south the Alps rise along its border with Austria.

Germany has 16 federal states, and over 82,5 million inhabitants living in its vibrant cities and throughout its picturesque countryside. Its capital is Berlin, which is also the most populous city. Other major cities with more than one million inhabitants are Hamburg, Munich and Cologne; the largest industrial region is the Ruhr Area, located in the western part of the country. 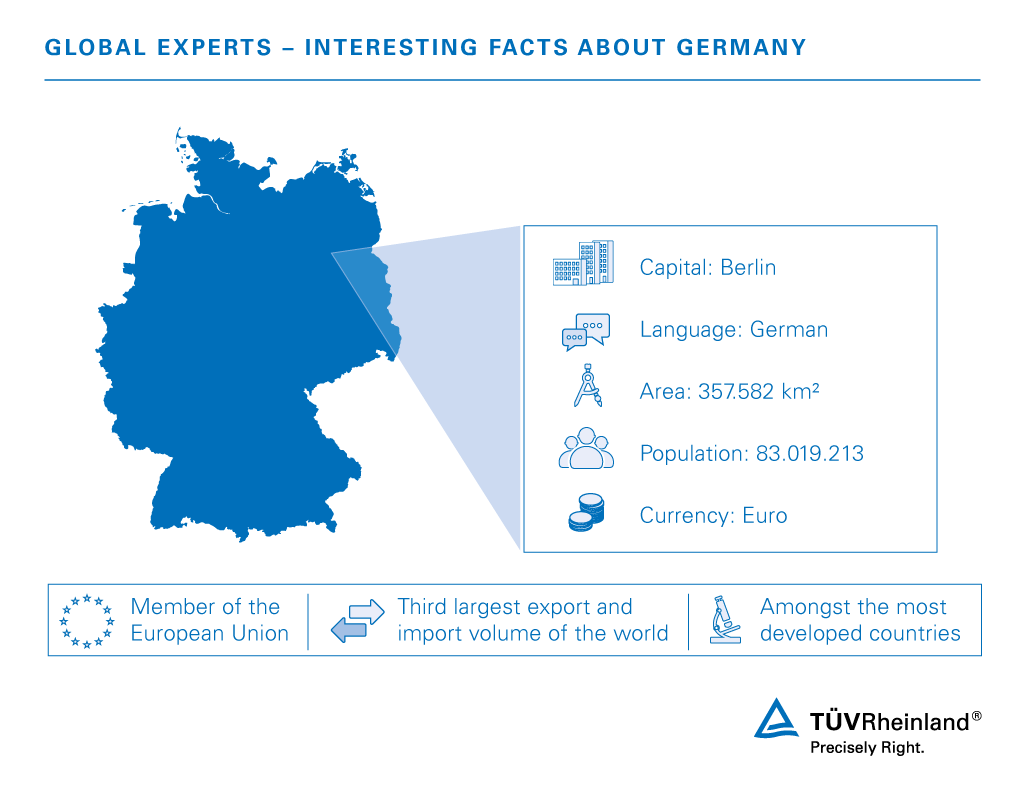 Measured by its gross domestic product, Germany is the largest economy in Europe and the fourth largest in the world. In 2016 it had the third largest export and import volume. As its raw materials decrease and industry becomes increasingly automated and digitalized, the country, which has long been known for the quality of its education system, is transforming into an economy dominated by research, development and services. According to the Human Development Index, Germany is one of the most highly developed countries in the world.

The majority of the population speaks German. There are also regional and minority dialects and accents and many migrants who speak other languages. The most important second language is English.

Germany is home to immigrants from almost every country in the world. According to government statistics, 12,9 % (10,6 million) of the people living in Germany did not have German citizenship at the end of 2017, while around 23 % (18,9 million) of the population were migrants or descended from recent migrants.

Germany's culture is diverse and home to many traditions, holidays and events. Its cultural monuments and cultural heritage sites have, in part, been declared World Heritage Sites by UNESCO.

Germany is colorful, diverse, safe and varied. It is a society that values freedom, democracy, the welfare of all in society and the rule of law.

Would you like to learn more about opportunities to continue your career in Germany? Do the Quick Check now!

Get in touch with us to find out more!